In my family history research I have the opportunity on occasion to read from older newspapers.  Just going back a few decades you notice a difference.  Going back 160 years and the differences between today’s journalism can be both painfully sad in their descriptions while hilariously funny in others.  The saying, the times, they are a-changin’ will never grow old and is never more obvious when reading from old newspapers.

Among my readings from that by-gone era are from Clearfield County, PA.  It’s an area I’ve written about before and from which a large part of my known family history takes place.  What follows are some of the more memorable tidbits I’ve seen from an era with language and sensibilities all its own.  Originally published in the long defunct Clearfield Republican each preceded by the date of publication and my own introductory title (in bold-face).  I hope you enjoy them. END_OF_DOCUMENT_TOKEN_TO_BE_REPLACED 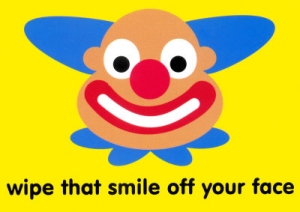 Humor does not diminish the pain – it makes the space around it get bigger.
Allen Klein

I’ve always been a jokester.  As I’ve written my boyhood best friend (bbf) and I were always cut ups and “the biggest fans of one another’s comedic skills.”  Comedy was our forte’!  (So we thought.)  I like to laugh.  I pity anyone who doesn’t.  Hard to believe there are people around who don’t much care for laughter… having a good time… a sense of humor. So it seems anyway.

There’s real power in humor and laughter.  They entertain us and make us feel good.  Laughter they say is the best medicine.  Laughter heals, alleviates pain, relieves stress and anxiety.  Researchers say humor is anti-aging and helps us live longer… and there’s more.

However, those powers of humor and laughter for many of us are slipping away.

Maybe it comes with age, we become way too serious.  Children tend to laugh a lot more than adults.  You’ve probably noticed.

The International Congress on Humor (who knew?) found that laughter is down as much as 82% from the 1950’s.  In those days people laughed on average 18 minutes a day.  Today, it’s between 4-6 minutes a day.  I guess laughter isn’t as much fun as it used to be. END_OF_DOCUMENT_TOKEN_TO_BE_REPLACED

“Growing old is inevitable.  Growing up is optional.”
“Age is just a number.” “You’re only as old as you feel.”
“Growing old ain’t for sissies.”

As much as we might wish it weren’t so and as much as the young think it will never come, we all grow old. At least we have hopes we will, rather than face the alternative. But I’ve also been known to say,  there are worse things than dying, and… there are.

With the passing of each year we draw ever closer to getting older… getting old. I’ve often reflected on how quickly it has come along. Certainly reckless living, eating, drinking and merriment — thinking we’ll stay young for ever, that tomorrow never comes  — will hasten its arrival.  In looking back I wish I had taken more time to stop and smell the roses. Not that I haven’t done that on occasion, it’s only I wish I had done it more. END_OF_DOCUMENT_TOKEN_TO_BE_REPLACED

My concern is not to make people read, but to make them think. ~~ Montesquieu

It started out innocently enough. I began to think at parties now and then just to loosen up.  Inevitably though, as often happens, one thought led to another, and before I realized it, I was more than just a social thinker.

I began to think alone, “to relax,” I told myself – but I knew it wasn’t true.  Thinking became more and more important to me, and finally I was thinking all the time.  I began to think on the job. I knew that thinking and employment don’t mix, but I couldn’t help myself. I began to avoid friends at lunchtime so I could read Tony Robbins and the various Life’s Little Instruction Books. I would return to work dizzy and confused, asking, “What is it exactly we are doing here?”

Things weren’t going so great at home either. One evening I suddenly turned off the T-V and asked my wife, “What’s the meaning of life?  Her only response was to roll her eyes. She spent the rest of the night in the basement playing Mario Brothers, while the kids were sent to their rooms. I soon had a reputation as a heavy thinker. END_OF_DOCUMENT_TOKEN_TO_BE_REPLACED

Tomorrow is the most important thing in life. Comes into us at midnight very clean. It’s perfect when it arrives and it puts itself in our hands. It hopes we’ve learned something from yesterday.

I ended by asking if you the reader knew who said that.  Suggesting no one cheat I promised to reveal the answer “tomorrow.”  So here we are, it’s tomorrow.  Did you cheat?

The quote came from a distant cousin of mine.  His name is Marion.  He was a big man, like many in my family are.  A masculine kind of a guy who was larger than life.  My family and friends loved him, so did I!  He was all-American and symbolized our family values so much so he became an icon.  An American icon.  Marion Robert Morrison is better known as the legendary actor John Wayne. That quote above appears on his headstone.  I have more to share on the thought of tomorrow.  But I’ll wait to do that until… well, tomorrow.

Meanwhile a Harris poll released in January of this year places John Wayne third among America’s favorite film stars.  He is the only deceased star on the list and the only one who has appeared on it every year since it began in 1994.  It’s quite an achievement.  I guess you could say, Marion was a People Person. And that’s a long ways to get to the point of this post. (Pretend it flows and transitions — perfectly.)

“I’m a people person.”  How often have we heard that said?  How often have I said it myself!  Can I be frank with you?  The fact of the matter is there’s a lot of them I can hardly stand.  But we gotta live with them, we have to tolerate them, so there you go.  Besides I’m one myself.  I’m a people person.  Isn’t that about as dumb a thing a people could say?   I think it is, but I’ve said it nevertheless.  I’ve been known to say dumb things.  It has however been a   l   o   n   g   time ago.

Have you noticed that people are among some of the most miserable, grumpiest species on the planet?  They’re in our neighborhoods and even look like us.  Some of them live right down the street.  Maybe you know one. Worse yet, maybe you are one!  I sure hope not.  Despite all that they have going for them, they’re miserable… cranky… sometimes mean… depressive for sure to be around.  Oft times brought on by the heartless actions of others, but just as often brought on by their own negative attitudes.

END_OF_DOCUMENT_TOKEN_TO_BE_REPLACED

Subtitled – Facing Off With Facebook or Tweeting My Life Away

Nowadays in this high-tech world of ours every Tom, Jane, Bob and Mary has a smartphone.  These handy little gadgets have effectively become the center of the technology industry.  The computer world as we once knew it is being reshaped and will affect how we use these various devices.  These handheld attachments to the wired world, and their built-in cameras, allow their owners to update their friends and family on every little facet of their existence.  Complete with illustrative photos it happens almost instantly through social media like Facebook and Twitter.

But alas, do we really need to know that Susie just checked in at Joe’s Pool Emporium with friend Margie, 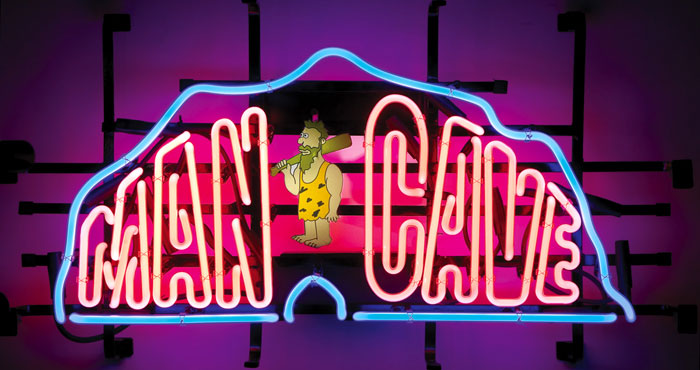 Many of my readers may not know there’s an official Man Card a select group of us guys have.  No joke, the Man Card* is real!  I’m not talking about some lame credit card or a lamer yet library card but I mean an authentic Man Card. Customized and imprinted with my name and my own unique membership number.  I even have a Certificate of Authenticity!  Problem is, I got caught violating my manly duties and zippo, they revoked it!  Lost my manly pride along with my Man Card and gave in to my cravings for female companionship and worse yet, matrimony.  It all crashed down around me a few years ago and I think it’s time I get my card back! 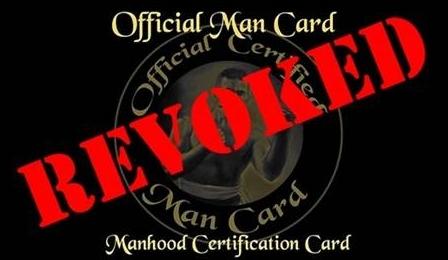 Women and that four-letter word L-O-V-E are the main culprits.  Dogs are man’s best friend but I admit it, I’m weak when it comes to the opposite sex.  Women are great, but boundaries prevail.  Of course there are lots of ways we can lose our high-station, and the privileges that go along with our Man Cards, but in my case this is my Achilles heel of a lifetime.  The fact is Love (translated women) have ruined more of my manly bro-to-bro relationships than anything I can think of.  Now I know what you’re thinkin’:  Tragic!  END_OF_DOCUMENT_TOKEN_TO_BE_REPLACED