Skip to content
Hello friends!  It’s been a long weekend.  My laptop AC adapter died early last week for a second time in just three months leaving it — temporarily anyway — a large paperweight.  Anyone who really knows me will tell you the sad reality of just how lost I am without my computer.  Every word and then some is true!  Happily relief is on the way but it might not be until next week when it’s up and running again.  Thanks to a local library I’m able to get online.

Without my not-so-trusty eight-year-old Mac laptop (whose battery no longer holds a charge) the last few days I’ve had to resort to old-fashioned paper and pen, as my overwhelming need to scratch the writer’s itch held me captive.  I was pretty proud of myself as I plowed through an entire book over the same span.  I also spent hours handwriting a dozen or more pages for future blogs and additions to my personal history.  I was on a roll!

Unfortunately disaster of the ultimate writer-kind struck when I left that spiral notebook at one of my offices late Sunday night. When I returned in the wee-hours of Monday morning it was gone!  So goes life as we all know it.  Troubling though that this is not a new lesson, but rather just a repeat of a tired old one.  All those pages, all those thoughts and recalled memories … gone … never to return, ‘least as they were originally written.  A lot of what I wrote came from inspiration I found in that book I just read, Growing Up Amish by Ira Wagler.  To say the least I’m disappointed in having allowed this to happen.  Anyway, as we all know, life does have a way of going on and hopefully we learn from our mistakes.  Not that I learn from them all as I’m still subject to the school of hard-knocks.

There’s a whole world of bloggers out there.  Some say there are about 450-million “active” English language blogs right now, but that number varies according to the source.  The web site Technorati.com estimated there were over 200-million blogs at the start of 2009, with exponential growth since then.  WordPress, whose services I use in the creation of this blog, is a country of sorts among the nations of bloggers.  Since starting this new blog at the end of June I’ve visited my WordPress blogging neighbors to get acquainted and along the way have made a few new friends.  We stop in and visit one another from time-to-time.

Here are four of my favorites that I’ve discovered and I hope you’ll take a moment to pay them a visit as well: 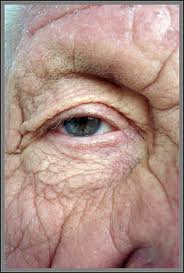 Bud from his blog Older Eyes (Reflections from an Older Perspective) was among my first discoveries.  Mostly retired and living the dream Bud posts something every day.  He recently reflected back on seven of his favorite posts that deserved recognition.  Among them was what he described as his “most beautiful post.” Perspective “a picture of how life is when (Bud’s at his) best” really was a beautiful post and I commented that “For reasons I can’t share it especially touched my heart.”

Bud’s older eyes aren’t nearly as scary as the single one pictured here as you’ll see when you take a peak.

For belly laughs — the really deep-down kind — I can’t help but lead you to Donald Mill’s blog  The Problem With Young People Today is …   His language can be a little salty, but Don, whose “real friends are all dead” speaks his mind and is down-right hilarious!  I recommend you send every young whipper-snapper you know to Mill’s site where they’ll learn the real facts of life!

Dangerously revealing the more feminine side of me I strayed one day recently upon Bianca Vaccarini’s I’m Not Skinny, But That Doesn’t Mean I’m Fat  blog.  Written for the female whose body isn’t cookie-cutter-standard Bianca, who’s a student at San Diego State, turns out is from my neck of the words here south of Seattle.

This in-between girl writes It is beauty that will catch your attention, but it is personality that will capture your heart. Bianca has both beauty and personality in spades as you’ll learn by checking out her writings on her fashion-oriented blog.

Then there’s the Nittany Lioness — Jeni — from Central Pennsylvania who lives very close to where I and most of my ancestry for several generations were born.  Jeni discovered my blog quite by accident and through an earlier connection discovered one-plus-one equals two. She spied my name, mentioned on Bud’s Older Eyes blog, and wondered could that be the same Rick Gleason … whom she knew through our mutual Family History circles?  Turns out I am and since then we regularly visit one another here in our digital neighborhood.

In her Crying Wolf post, from her Down River Drivel blog about ten paragraphs into it, she records that historic moment.

Finally let me suggest one bonus post, a fifth favorite. Its one of my own you may have missed.  Recently imported from my earlier blog it’s among my personal favorites.  I wrote Independence Day a little more than four years ago while traveling America’s highways at the controls of an 18-wheeler. I saw a lot of the country in those days and I describe a bit of what I saw and endured in this post. America is truly a blessed country and a wonderful place to visit as described back in June of 2007.

In closing my sincere thanks to all who have visited here and especially to those who have said hello. Of course your comments of support and enlightenment at the end of my posts are always welcomed. It’s gratifying, to say the least, that you take time from your busy lives to see what it is I have to say… these things I share with my friends.  Thanks so much!

3 thoughts on “Spreading the Wealth”